The indigenous people within the Arctic keenly feel the effects of the combination of resource development and climate change, as do governments, agencies, and industries operating in these regions. The combined effects of infrastructure and climate change, however, have not received much interdisciplinary scientific study. The Rapid Arctic Transitions due to Infrastructure and Climate (RATIC) initiative is a forum for developing and sharing new ideas and methods to facilitate the best practices for assessing, responding to, and adaptively managing the cumulative effects of Arctic infrastructure and climate change. The initiative was developed by D. A. Walker and endorsed by the International Arctic Science Committee (IASC). 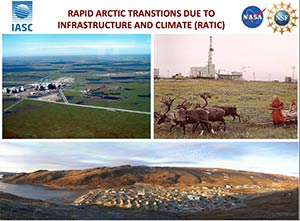 The first RATIC workshop was held during the international Arctic Change conference, 8-12 December 2014, in Ottawa, Ontario, Canada. The workshop was organized so that international scientists who have been working independently in several areas of the Arctic on issues related to Arctic infrastructure could network with each other and share their findings.

The workshop on December 9 was organized around infrastructure case studies from the Prudhoe Bay oil field, AK, the Bovanenkovo gas field, Russia, and northern Canadian communities. It attracted about 40 participants. The two topical sessions on December 11-12 included oral presentations and posters that included first-author papers and posters from Russia (9), USA (9), Canada (6), Finland (2), and Norway (1) (Appendix C).

The workshop was supported by $10,000 from the International Arctic Science Committee (IASC) for Association of Polar Early Career Scientists (APECS) to attend, and four of these were Russian students who participated in the Land-Cover Land-Use Change (LCLUC) activities.

Outcomes and Next Steps

Several studies emerged as possible models for programs aimed at developing sustainable approaches to Arctic development, including the Integrated Regional Impact Studies (IRIS) and the Arctic Development and Adaptation to Permafrost in Transition (ADAPT) in Canada, the Finnish-sponsored Environmental and Social Impacts of Industrialization in Northern Russia (ENSINOR) project in the gas fields of the Yamal Peninsula, Russia, and the oilfields in northern Russia, the U.S. interagency North Slope Science Initiative (NSSI) and the NSF Arctic Science, Engineering, and Education for Sustainability (ArcSEES) initiative in Alaska.

An IASC-RATIC white paper based on the Ottawa workshop is in preparation and will be presented at the Third International Conference on Arctic Research Planning (ICARP III) in Yohama, Japan, 23-30 April 2015. The meeting offers an opportunity to direct more scientific attention to these complex infrastructure-related issues during the next decade. As first steps, the RATIC group recommends that the combined IASC Cryosphere, Human and Social, and Terrestrial Working Groups collaborate to (1) develop an IASC interdisciplinary RATIC Network; (2) incorporate infrastructure-related issues more explicitly in the working groups’ research priorities; and (3) promote regular RATIC workshops at international scientific meetings.

The Alaska Geobotany Center is located on the West Ridge of the University of Alaska Fairbanks campus. Our office is located in room 252, on the second floor of the Arctic Health Research Building.